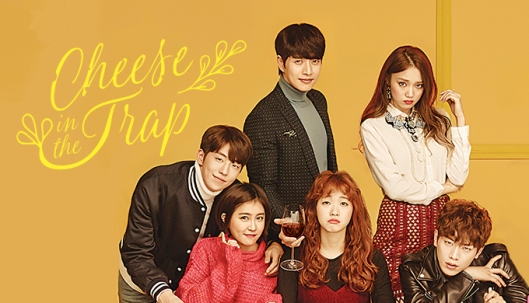 The feels. Sorry but I love both main and the second lead on this one. Jung’s looks against In Ho’s personality, I just can’t make a decision. LOL! Anyhow, it took me such a long time to get to watch this one coz there were a lot of negative comments about the ending and I’m not much for sad endings (Uncontrollably Fond is an exemption).

Cheese in the Trap is from a webtoon of the same title. They’re also doing a movie this year but they’re replacing Eun Tak with another actress. Apparently, the webtoon is not done yet the writers had to improvise. Before I watched the whole thing, I cheated and skipped to the ending then I also looked up the webtoon. I wanted to make sure I will be okay with the ending before spending hours on it. So here’s what I think;

Ending: It’s open. Haha! Koreans are so fond of open endings if not brief endings – yung tipong you spent 15+ hours watching it and then only 1 – 2 minutes happy scene sa end just like Goblin. Sometimes I feel so much injustice. 😛 But this one, even less than that. I was left hanging, maybe they did end up together or maybe they just grew apart but remained friends. I, however would like to believe that they ended up together.

Cast: Eun Tak from Goblin! Remember that scene where Goblin turned to ashes and she was crying so hard, I thought man she can cry. She did the same thing here. She can really cry like there’s no tomorrow! I also met Weightlifting Fairy Kim Bok-joo’s cast here! Bok-joo played In Ha who’s the sister of the second male lead here. She’s good, her character here is totally different from WLFKB and Doctors. They’re all good and good looking as well. Park Hae-jin is too old for the character who’s a college student but who cares, he looks way too young for his age.

Plot: Relatable! This is not your usual nice and forgiving people. The main cast is a vengeful person who will scheme to make your life miserable if you screw with him or his girlfriend. And I believe that it’s just fair. I mean, you can’t be nice all the time otherwise you will get trampled. I love that he’s got an evil side! Kakapoy aning main characters na sige lang daug-daugon ba, pede kana pung naay evil intentions. Haha. It also brought me back to my college days, I remember the kilig feels when my crush bought me lunch sa cafeteria. Or nung classmates kami or we’re in the same group sa projects. The story is about college life, bullying, relationships, dealing with family problems, worrying about getting a job and graduation. Yung mga ka-group mates mo na hindi tumulong tapos same yung grades nyo? Naalala mo yun? Uhhhmmm, memories. The love story – kilig!

OST: Such has been on loop for hours now. There’s a certain sadness in the melody and I can’t stop thinking about it’s ending.

If you haven’t seen this then add this to your must watch list.