The feels – kilig hanggang langit. Sorry na, wala kasi akong life, ito lang ang inspiration ko. Haha! Pero in fairness, super kilig ang pair ni Bong-soon and Min-min. It’s not the OTP pero I can forgive the transference of emotions to Min-min from Gook-du. This is the first alpha heroine drama I watched and I loved it! It’s a rom-com with a bit of dark criminal elements. Despite the loop holes in the storyline, ito yung tipong mapapa-smile ka at the end.

Okay so basically, I watched this before I watched Hwarang. Ongoing pa siya that time which is why I was able to finish Hwarang before this ended. Ang guapo ni Park Hyung-sik plus he gave the character his best. Ang cute niya tingnan pag kinikilig siya coz of Bong-soon. On a serious note, the writers did not fully develop that part about his family and his trauma.

END_OF_DOCUMENT_TOKEN_TO_BE_REPLACED 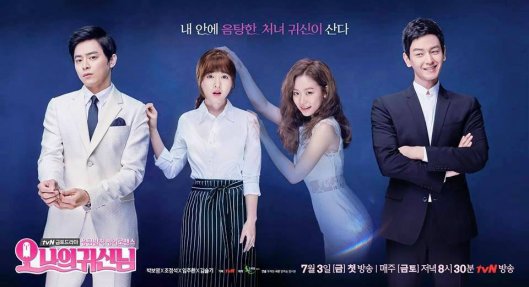 Plot: Na Bong-sun (Park Bo-young) has an extremely timid personality and low self-esteem, doesn’t have any close friends, and is constantly getting reprimanded at her job as an assistant chef at Sun Restaurant. She also occasionally sees ghosts, thanks to a shaman grandmother. One day, Bong-sun gets possessed by a lustful virgin ghost named Shin Soon-ae (Kim Seul-gie). To make up for the lack of romance in her short life and believing that only by losing her virginity will she be able to “resolve her grudge” and move on to the afterlife, Soon-ae is determined to seduce as many men as she can by possessing various women, and she finds the perfect vessel in Bong-sun. Bong-sun’s boss is arrogant star chef Kang Sun-woo (Jo Jung-suk), whom she secretly has a crush on. Sun-woo hasn’t dated anyone since getting his heart broken by his college friend Lee So-hyung (Park Jung-ah), who’s a TV producer. But when Bong-sun seemingly gets rid of her shyness and suddenly changes into a confident, dynamic woman, she finally catches his eye. Meanwhile, the mystery surrounding Soon-ae’s death involves Sun-woo’s brother-in-law, a kind police officer, Choi Sung-jae (Lim Ju-hwan), who may not be what he seems.

What I Think + Spoilers: Cheppp! Aw.. 😀 Super cute. Hahaha. Kung maka-chep si Bong-sun while possessed, nakakatawa. Despite the thought na there’s a ghost in the plot, it’s not at all scary! Save for some scenes where she can see the ghost na scary talaga ang hitsura. Chef Kang is the same guy from Jealousy Incarnate. He’s also in King 2 Hearts, still in my to watch list. Bong-sun’s change in personality when possessed is very drastic that it’s hilarious. This is in my highly recommended list because it’s funny and light.